The Night Jesus Chose You

The Night Jesus Chose You 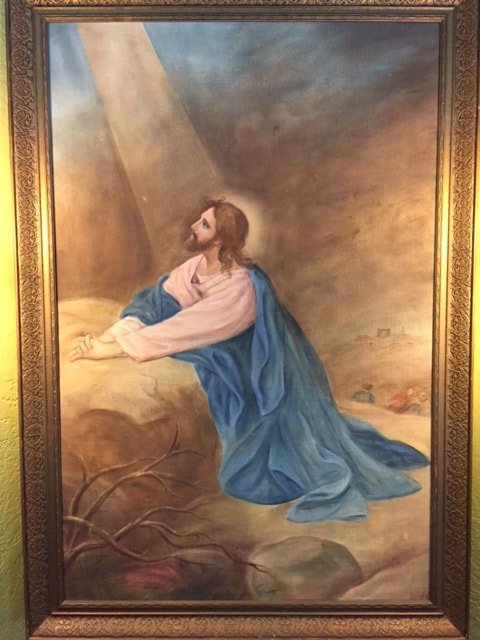 This oil painting, that hangs in my living room at an overpowering 3 feet wide and 5 feet tall, was chosen in 1920 by my non-religious grandfather when he was 8 years old. My granfather finally acknowledged his need for a Savior over 50 years later. Today this painting is more than 97 years old. It was painted by a man who was legally blind in Wichita Kansas. His daughter advised him with perspective and color, which is why the hands are a bit off. This painting reminds me daily that Jesus Chose Me.

These were all points where he renewed His commitment to carry out His Father’s will, but the time portrayed by THIS picture is when He made the decision.  I will suffer and die so that all of mankind may live.

What really happened at this time?

Jesus bore his soul to his disciples, “my soul is overwhelmed with sorrow to the point of death.”  Can you imagine JESUS saying that?

36 Then Jesus went with his disciples to a place called Gethsemane, and he said to them, “Sit here while I go over there and pray.” 37 He took Peter and the two sons of Zebedee along with him, and he began to be sorrowful and troubled.38 Then he said to them, “My soul is overwhelmed with sorrow to the point of death. Stay here and keep watch with me.”

And Then He Chose You and I

39 Going a little farther, he fell with his face to the ground and prayed, “My Father, if it is possible, may this cup be taken from me. Yet not as I will, but as you will.”

What did Jesus mean, “if it is possible, take this cup from me”?

In the ancient Jewish betrothal ceremony the Friend of the Groom would read the marriage promises or Ketubah contract to the Bride’s family and the Bride.  These were the things the groom would promise to provide and do for the bride. After reading Groom’s promises, the father of the groom would give the groom a cup of wine and ask, “are you willing to fulfill these promises and keep this covenant?”  The groom would stop and consider this.

After careful consideration, if the groom agreed to keep these promises, he would take the cup from his father and drink the Cup of Acceptance.  Now there was no turning back.

Jesus is Our Groom

Jesus is the bridegroom for all who believe and follow Him.  He also had a contract, promises to fulfill to His bride. Isaiah 53 prophesied His coming to earth hundreds of years prior to Jesus birth. Isaiah 53 also lines out the “Ketubah”, the covenant promises Jesus must fulfil for his bride.

Surely He has borne our griefs
And carried our sorrows;
Yet we esteemed Him stricken,
Smitten by God, and afflicted.
5 But He was wounded for our transgressions,
He was bruised for our iniquities;
The chastisement for our peace was upon Him,
And by His stripes we are healed.
6 All we like sheep have gone astray;
We have turned, every one, to his own way;
And the Lord has laid on Him the iniquity of us all.

So as Jesus kneeled there in the Garden, I can imagine the Holy Spirit, who is the friend of the Groom,  reviewing the promises Jesus must keep for His bride, Jesus feeling the impact of each word in his physical body.

All this pain for humans who had done nothing but reject him.   Jesus looked over to see his disciples, to whom he had just poured out his heart…”I am sorrowful to the point of death”

and there they were, sleeping...

40 Then he returned to his disciples and found them sleeping. “Couldn’t you men keep watch with me for one hour?” he asked Peter. 41 “Watch and pray so that you will not fall into temptation. The spirit is willing, but the flesh is weak.”

Jesus must have asked himself, “Do I really want to keep this painful Ketubah for these people?”  This is when He made the choice, the Cup of Acceptance was in front of Him. …

42 He went away a second time and prayed, “My Father, if it is not possible for this cup to be taken away unless I drink it, may your will be done.”

43 When he came back, he again found them sleeping, because their eyes were heavy. 44 So he left them and went away once more and prayed the third time, saying the same thing. (My Father, if it is not possible for this cup to be taken away unless I drink it, may your will be done.)

At that moment, on His knees in the Garden,  Jesus drank the Cup of Acceptance saying, “yes, I will keep the contract.” and He chose You and He chose me.

Because Jesus chose you and I we have the ability to be in Covenant with Him.  To have a new identity, to have the authority of the King of the Universe, the Creator, at our disposal. We have a covenant parther to meet all our needs, to guard our back when we are in trouble and to give us everything we need for life and godliness.

And Jesus did it for you.  He Chose You.

You can learn more about your part in 30 Days of Honor, Becoming the Bride of Christ.