We were having guests of all sorts…omnivores, unhealthy eaters and vegan guests…what to do?

My first inclination was to make Spaghetti Squash Lasagna but no that wouldn’t fly with our non-healthy eaters…how about Spaghetti and Porcupine Meatballs?  But what about the vegans who WILL NOT eat any animal protein?  Hmmm…I know!  I’ll make two  versions of meatballs, vegan AND with grass fed beef, everyone loves my mother-in-law, Mary Lou’s famous porcupine meatballs.  In fact…they were the source of our first major fight as newlyweds!

Yes, it was an all out brawl.  I got the recipe from mom-in-law; one I had never eaten or even seen before, and thought…this looks easy!  Well it called for onions and bell peppers since at that point I had never eaten either of those foods and my family never cooked with them I saw them as non-essential and left them out.  Little did I know bell peppers and onions were what MADE the meatballs hubby’s favorite.  Well…he was so excited when we sat down for dinner and so blessed I would make this meal for him (it was a lot of work for an 18 year old).  One bite and the fight was on…”these are NOT my mom’s meatballs”…I’ll let your imagination finish the story.  Needless to say I learned to cook with onions and bell peppers and he never said “this isn’t my mom’s ____” ever again! 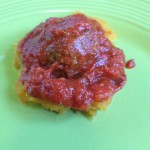 Back to the Vegan Meatballs.  So I looked up a recipe on line and found one that looked great from Angela Lidden of www.ohsheglows.com.  Unfortunately I didn’t have the exact ingredients on hand and living in the wilderness made it impossible to quickly run to the store so I made some minor modifications.

The great thing about beans, nuts and seeds is they are interchangeable.  If you don’t have one you can usually substitute another without too much flavor or texture disruption.  Angela’s recipe called for walnuts…fresh out…but I did have almonds, cashews and sunflower seeds.  Sunflower seeds seemed right.  She also used kidney beans…darn…none of those either.  Garbanzo or Pinto? 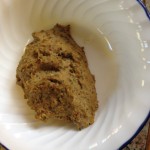 Hmmm….Garbanzo.  Next ingredient…carrots…woops!  Out of those too (I think Fender the 60 pound puppy got the last one as a treat).  But I did have zucchini (Fender liked that too).  Everything else was available so with these substitutions and a prayer lifted for grace I began.

One thing I loved about this recipe, that made it a HEALTHY vegan food (many are just pure starch) was all the herbs and veggies.  Another thing I loved was that I was able to just dump everything into the food processor and turn it on.

One thing I SHOULD have done differently was blended everything but the beans and then just pulsed them for a little more texture.  But I was in a hurry…two different dishes, company coming, etc and so my batter actually turned out like…hummus!  It tasted really good!

Hmmm…how will this hummus bake up?  How can I give it more texture?  Chia Seeds!  Wow these vegan meatballs are turning into nutritional powerhouses…stop eating the batter Celeste. 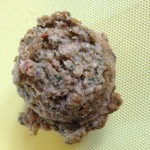 Fortunately it was nice and firm so I got out the small cookie scoop and scooped up little round balls onto a baking sheet and guess what?  They baked up as nice little perky meatless meatballs.  You can see all the fresh herbs and chia seeds in the “raw” vegan meatball.

For “noodles” I used the spaghetti squash I had baked and frozen from our garden last year (still in love with that concept). 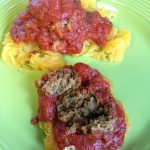 I then made a beautiful salad and some fresh balsamic vinaigrette with sun dried tomatoes in the magic bullet.  Phil set the table and it was a beautiful meal, enjoyed by all.

Sorry I got caught up in the evening and didn’t take any photos of people loving the food…must remember to do that!

Must Remembers If You Make This Recipe!

1.  Add the beans last and pulse so you have some texture to the “meatball”.

2.  Do not over bake.  I use an oven thermometer bc our oven is weird…the second batch was in a little too long and they were vegan hocky pucks.

4.  Taste the “batter” and make it to your liking…but if you eat too much (it’s really good) you won’t be hungry for dinner…very filling.

5.  Don’t make a big deal about it being vegan to non-healthy eaters…just say its a new recipe you are trying…they will like it.

6.  Yes, I know you want the porcupine meatball recipe too…that is for another day!

This recipe makes about 20 of the small-cookie-scoop-sized balls.  You could freeze them before baking if that is too many for you to eat all at once.  If you were going to make felafel you could baste them with a little more grapeseed oil before baking…giving a more fried texture without the frying.

To Freeze:  Make your meatballs, put on a baking sheet and put in freezer until frozen solid (several hours).  Remove from freezer and store in a ziploc brand freezer bag or in a BPA free freezer container.  Use within one month, thaw and bake as directed.  You could also freeze your leftover sauce in a small container or ice cube tray, then put both the sauce and the meatballs in the oven together.  Voila!  Dinner!